Peanut has been fascinated by caves for a long time. His only visit to a cave was in utero, when Spouse and I went to Karchner Caverns in Arizona. I was seven months pregnant and had several almost-panic-attacks while underground. Humidity, claustrophobia, and pregnancy-induced inability to breathe made the cave terrifying. But gorgeous. And somehow that must have stuck with him. 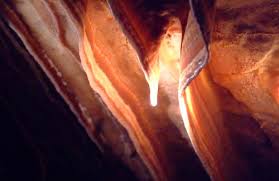 We’ve watched the cave episode of Planet Earth maybe five times in a year. He can’t stop talking about a cave movie they watched at school last year.

He’s been asking to go to a cave for months. And I mostly assumed that outside Mammoth Caves and Carlsbad, there aren’t many around us.

When I finally looked on the googles, I found caves that are literally on the way to our big Tahoe camping trip every year.

So we crammed the kids in the car and tolerated their incessant bickering to see this (all photos below are mine):

Helictites make me think of Unicorns. And this cave had millions of them.

I had forgotten how miraculous it feels to crawl through a small hole in the heat-cracked earth and arrive in a cool, wide, dark tomb carved over tens of thousands of years by slightly acidic water.

We have a friend who caves, but Peanut has only met her once and thus can’t be duly impressed by her hobby/avocation. I want to send her the following photos, though, because we can lure her out to California.

How about a pool 150 feet down from the cave entrance?

It’s intensely beautiful to watch kids stare way up and then waaaaaay down to learn the difference between stalactites and stalagtites.

I see you hiding in the draperies, bacon. Sparkly calcite cannot disguise your mock deliciousness.

Forgot to ask if this white residue on this flowstone was more of the moon milk we saw on the walls. Mmmm. Bacterial moon milk.

I love this dinosaur-mouth configuration so much.

A bit of background: I love rock shops more than any single thing in my life, kids notwithstanding. Maybe. Depends on the day. I have dozens, really and truly dozens, of childhood memories of rock shops. I can tell you exactly which rock I bought or found and at which rockshop of patch of earth for every rock ever obtained from the time I was 7. Seriously. I distinctly remember why each of those rocks called to me. Because they call loudly.

And I cannot be dragged from a rock shop until I’m done. Forget can’t…I will not. Not that I’d know. Nobody has ever tried. I have lovely memories of my parents waiting for me at rock shops. Of being left alone to wander, gently touch, careful consider while they were…ah, hell, I don’t know where they were. I can’t imagine they were looking, too. Bored at the door? Consuming secret cookie stashes while I wasn’t looking? I never considered them, selfish rockhound that I am. I’m guessing they were patient at first. And I’m guessing that they got bored, or that my brother got bored, or that I somehow tried everyone’s patience. But know what? I don’t remember caring one whit whether everyone was exasperated with the rock shop or not. I was prepared to spend all day filling my one-ounce cup with perfect rock chip specimens, even if it killed my whole family.

So when my boys entered the rock shop after an hour below ground in a majestic cave, I rather expected them to shrug and ask for candy. My poor sugar-denied kids always ask for candy. And I always say no.

Anticipating their request and their disinterest in the rock shop, I made a beeline to the rock candy I saw as soon as we entered, and waited for them to follow. I was going to make this cave, this rock shop, memorable for my kids, who likely cared more for sugar than for rocks.

But the little guy ignored me and stood, eyes wide, in front of the pick-your-own-rocks barrel. Fill a bag with any rocks you choose? Any at all? My idea of heaven and his idea of…a whole afternoon of joy. He’s four, y’all. And he spent 20 minutes choosing the best rocks. Never once did he see me at the candy display. He was so engrossed in rock selection that he didn’t look up even when his dad offered tiger’s eye rocks for the bag. “Dad,” he said without looking at either the man or the stone, “this is my choice. Stop it.”

Not bad for a pink-obsessed 4yo…these were his actual selections and he’s still quite proud of them.

The eldest wandered aimlessly. It was as though he couldn’t find the right rock. I let him be, scouring the shelves for rocks that were one part neglected, one part magic, one part architectural marvel, and one part undervalued.

Butter finished his rock bag. He appreciated the rock candy. We went outside with his dad to slurp and ponder his treasure.

And still Peanut wandered. I chose my rock carefully. I triple checked to be sure I wasn’t missing anything on the shelves.

And still he wandered.

I stayed back and watched for a while. I showed him my finds and he seemed duly unimpressed. I offered suggestions for areas in which to look for something that might speak to him.

And he seemed stymied. No break-your-own-geodes because his aunt and uncle gave him the best geodes ever two years ago, and he doesn’t want more. No dogtooth calcite, for reasons only a psychologist will be able to discern. No broken shark teeth because he found real, intact, beautiful fossilized shark teeth with his dad at the beach. No arrowheads because, “Mom, who would want that? They’re replicas!”

And then he found the select-a-pendant-and-cord display.

He made it to the car before he realized his necklace had already fallen off.

A lot of looking.

Butter found it for him, how I’ll never know. In the middle of the parking lot.

So we have our cave experience. And our rocks. We don’t have any more rock candy. But it was as delicious as any Doozer sugar sculpture*.

* I read that Doozers’ buildings are allegedly radish dust, but those are clearly made of sugar. My entire childhood will be a lie if Doozer buildings aren’t basically rock candy.

All, my friends, ALL was right with the world in that moment.**

**Except that almost nothing is right with the larger world right now, and that rock candy might not be a Doozer creation. But I’m trying to not have a sad on my cave and rock post. Because perfection.