The big guy has had his last day of preschool. Two years of a loving, supportive, superb play-based outdoor/indoor extravaganza of exploration and choices. He has, in the past month: lost a tooth, learned to tie his shoes, and ridden a bike without training wheels. It’s killing me, but I guess he is ready for kindergarten. [sob] I’m worried about the unfortunate things kindergarten has become and the heart-wrenching ways it affects boys, but here we go.

The little guy is a flirty goofball of performance and projects. He’s only saying a few words, but he signs dozens of words and has fabulous grasp of social relations. He has a great sense of right and wrong and has no problem telling an older child to “knock it off,” to “give it back,” and to “step off or I will bite you.”

It’s killing me, but I think he’s ready for night weaning. [sob] We believe in nursing on demand, we believe in nighttime parenting, we believe in compassion. And I miss sleeping. I need to edit, I want to write, and I have to think. I haven’t slept more than three hours at a stretch since he was born. Between teething and ear infections he’s been up every two hours for a long damned time. Of course, night weaning doesn’t equal sleep. His older brother night weaned at 18 months (forcibly, as a last resort for my sanity by Spouse, who spent three months awake trying to lovingly convince Captain Stubborn that the milk goes away during sleep time). That willful, opinionated Peanut didn’t slept through the night until after he turned 3. Butterbean seems more willing to nightwean. The few times I’ve said no, he cries an angry cry for 30 seconds then lies down and falls asleep. [sob] I don’t like facing this milestone.

But, as with shoelaces and two-wheelers and kindergarten, we have to try. Because sleep and writing and editing and half days with only one kid might make things a lot easier around here.

Wish us luck, would you?

This weekend, Spouse took Peanut to an arcade museum. Pin ball machines, carnival games, and skee ball. Peanut was in heaven and has, since he came home, forced us to perform feats of skill and chance in exchange for tickets. Tape flags, really, that I gave him to get him to stop raiding my desk and (to my horror) the books I’ve flagged during my ongoing, stunted, stop-and-go research.

But that’s another story for another day.

Anyway. I’ve been bouncing balls across the room into yogurt cups for tickets. Spouse has been coaxing plastic toys through jumping contests for tickets.

And when Butter finally let go and walked on his own, Peanut counted the steps. And awarded Butter tickets for each unassisted step. 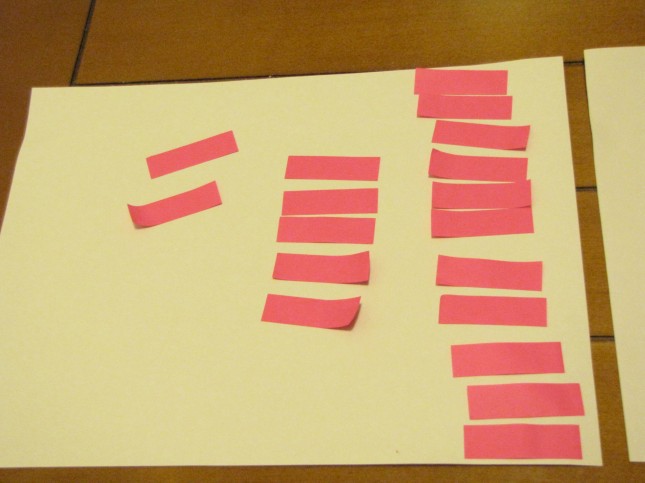 Peanut is so excited to be in control.

Butter is so proud of himself it’s irresistible.

It’s a good time to be at Casa Naptime.