I went to see a friend’s one-man show at the SF Fringe last week, and it was so lovely. All of it. The play, the performance, the music, the audience, the lighting problems, the crappy neighborhood, 99-seat black box, the dingy old seats, the props, the compromises, the costumes, the sweat, the tears, the waiting, the request for donations. 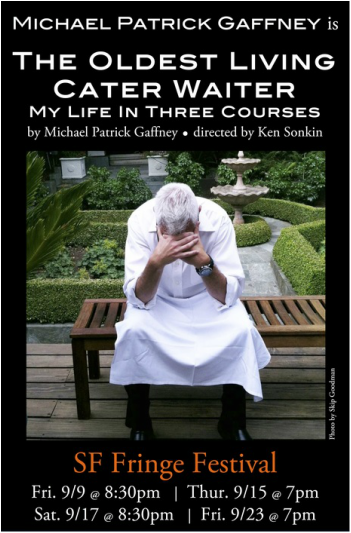 Every minute of it.

Because theater is so much of who I used to be, because I’ve loved this particular show since it was an idea five years ago (then as a rough-draft, then at a reading, then at a staged reading, and now as a fully produced show). Well acted, well directed, well attended. The place was sold out for every show, he was named Best of Fringe, and the audiences and critics loved my darling friend, his writing, his acting.

The evening was lovely because it belonged to my Michael. Wholly.

But also because I fucking love theaters.

The thrill I get when walking into a black box theater exceeds my excitement at walking outside on a gorgeous Saturday morning, headed with my boys to the local bakery. It’s true. Tell their therapists, I don’t care. I love dingy, dusty, moth-eaten theaters. And opulent, gilded, soaring-ceilinged theaters.

I can count on one hand the number of theaters I’ve been in since Peanut was born. And in all of those theaters I was there to watch, not to perform.

I haven’t auditioned in over 15 years. My headshot is shockingly young.

I haven’t performed in 2 years, and that’s only if I’m counting conferences at which I presented. I should count karaoke, too, but I don’t. Because I do actually know the difference. The last time I was in costume and makeup cleaving to a script was in 2000.

That hurts to write. I looked for the old review, and it’s in a paper that features an article on Napster. Yes, really.

The last time I did stand-up was 1997. Twenty years ago. Open mic at BlogHer’s Listen to Your Mother session doesn’t count. I did make a couple of people cry, though, so that was worth the mic time.

I could excuse this gap in my theatrical life by explaining that theater is for night owls, and I’ve had to be up early since I had kids. But that’s 11 years. What happened to the other 6? I could blame it on work. Or grad school. Or being a grownup trying to make a living.

But none of that is true. I always meant to go back. When I was moving toward things, it made sense to prioritize successes in different arenas. Now that I’m restless and floundering, auditioning takes way more courage than I have.

I miss the theater. I can’t audition right now, because I can’t accept any role I’m given, unless we rehearse only every other Sunday. And perform every other Sunday. Not likely, unless the show I’m doing is liturgical. [Don’t think I haven’t considered that. Maybe a little choir to get back into performing. A little open mic. A little…]

Actually, there are possibilities. There are several. I think it’s time to look into the local open mic scene and The Moth schedule.

More important: congratulations, my dear friend Gaff. What a lovely show you wrote and what a stunning performance you gave!

One thought on “Golly gee, I miss theater”