Well. I knew it would happen. I knew the anti-honeymoon would eventually happen.

I’ve been blogging a bit about how our family is settling into two households and how that has been better for everyone. I’ve made sure to caveat how sad and caveat how hard we’re working. And caveat anything tangential because caveats are my wont.

Not always, of course, but when necessary.

See? They’re like candy. So delicious and so hard to stop.

Anyway. The kids have handled the separation well and have been kinder to each other. Notice how I used the past tense. Because holy guacamole is the older one being mean lately. 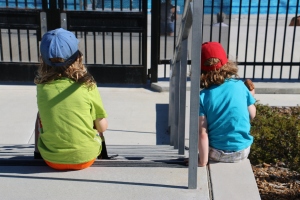 He’s moving closer and closer to prison, it seems.

Those two options pretty much cover it, I think. No other choices.

He’s a wonderful child, full of imagination and scientific logic, generally kind and very funny. His greatest pleasure is making me laugh. So whatever bodysnatcher has a hold of his shell is having a great time, because this child is clearly possessed by an alien, ghoul, monster, or bank CEO.

At least once a day this week he’s yelled in my face that whatever we’re talking about is none of my business, or telling me to shut up. He’s grabbed my arm, hard, to make me understand that he wants me out of his personal space.

And all of this rage has gotten an, “Oh, NO. You can’t talk to me that way. I’ll listen to what you have to say if you take a breath and talk kindly.” He knows he has more power with his hands and his voice down, but he doesn’t care. He knows that he can take a breath or take some time apart from situations that make him mad, but he doesn’t care. He seems to want to make everyone miserable. He has been grabbing his four-year-old brother by the shoulders and squeezing hard, for even slight infractions of what he perceives, at eight years old, as the right way to do things. He’s enforcing the rules with an iron fist, and I don’t like it.

And I tell him “you’re important to this family and your opinion matters, but you may not police other people. Your body is your job, and you are not responsible for anyone else but you. If he makes you mad, walk away. Take a break.”

This usually gets an epithet barked at me. And then a privilege taken away.

Yesterday he bickered with a playdate as though they were siblings, calling each other names (I stopped that kindly) and criticizing each other’s homework habits (I stopped that kindly) and challenging each other on how to play games properly (I told them they could go to separate rooms if they wanted to fight, but that I welcomed them finding solutions together.) It was annoying. At soccer practice, Peanut criticized the same boy for something he did near the goal, and the boy lost it. He pushed Peanut, who pushed back. The coach talked to them and had them talk about what they needed and wanted. Peanut very impressively said, “I don’t like it when you push me, but that doesn’t give me the right to push you.” And then he went home and pushed his brother.

And this morning started the whole cycle again. 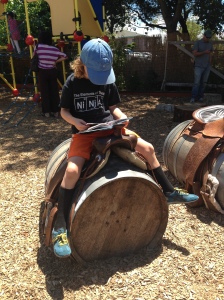 You’re eight. Life is outrageously easy. Stop it with the assholery.

He’s also having outsized tantrums in which he digs in his heels and simply won’t give up. He sat on the edge of the tub for 45 minutes the other night refusing to brush his teeth because I got too angry with his refusal to floss and gave myself a timeout. He refused to brush until I sat with him. I explained that my kindness had run dry and he was welcome to come in for a long hug when he was done brushing, but that I wasn’t going to sit with him. He finally brushed when I set a timer and told him he had five minutes to get in bed, else be excused from soccer the next day for lack of adequate rest.

I’m weary of this rage from a small boy. I asked him what he needs. I asked if he’s tired or needs a break from soccer or needs extra hugs. He told me needs a family without a brother. I said I hear his frustrations and helped him think of ideas for getting more time away from the little tyrant. He’s been saying for 3 years that he wants a family without a brother, ever since Butter learned to walk. I listen sympathetically, but, quite reasonably, don’t offer to find him a family without a brother. They don’t have a great relationship. Peanut is a rule follower and rule enforcer, and his brother writes his own rules. Peanut hates that little kids can’t do everything as well as he can and don’t heed his every request. He also has the insecure human’s need to make others feel small when he doesn’t feel strong enough. After an hour or so of puzzling out something impressive, he’s magnanimous and kind to his brother. Proud of himself from science class or engineering projects or video game design, he wants to teach and listen and generally beam with pride. But that feeling of pride is too rare to sustain their relationship.

Something is making my son retreat inward and create nothing but Dark Art magic with his considerable brain and usually kind heart.

On the walk to school today, we caught up with a neighbor mom and her kindergartener. Her older son is in Peanut’s class, and I assumed he was home sick. On the walk, though, she told me that he has been impossible lately, refusing to get ready, yelling at her, and expecting way more nannying than a third grader should. She said she was fed up, and when he talked nasty to her this morning, she left him home. His father agreed to stay home long enough for our friend to get the little one to school and back. Peanut’s friend had already missed soccer practice this week due to ragingly bad attitude.

I was so happy I could barely speak. Because her kid’s asshattery can’t be All My Fault. I barely know him. And odds that their mutual ridiculous behavior are collectively All Our Fault are slim. So the list of potential causes shifts to:
Full moon
Lunar eclipse
Early-onset puberty
Toxic chemicals in drinking water that only affects eight-year-olds
Totally my fault, so much so that my ill will affects several blocks in each direction.

Anyone else with a particularly rude eight year old lately? Wanna blame it on me? Or take some of the blame for my kid this week? We could swap responsibility until they’re 30 or so. Or we can all blame it on my failed marriage. That would do wonders for my need to poke that open wound a bit. Hey, we could blame your kid’s nastiness on my kid’s nastiness and vice versa! Come on! It’ll be fun!