I have to admit to unreasonable happiness—nay, untoward joy—that my son showed interest in fencing. And that his friend initiated a conversation about trying fencing. And that my sweet and wonderful coach, a fencing master with decades of experience teaching kids to fence has classes we can actually attend. 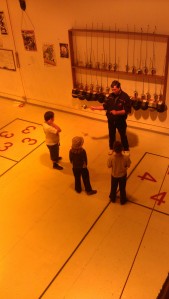 I will also admit to actual tears watching the man I’ve appreciated for 20+ years show my dear little guy, whom I’ve only known for about eight years, why a foil is not a sword (because it’s made dull, flexible, and not intended to harm), why the en garde position is ideal for fencing (showing less target, weapon hand in position to defend and attack), and why the sport is called fencing (offense then defense then offense then defense in rapid, unpredictable succession).

I beamed with pride watching Peanut’s personality show itself on the strip. Though cautious and analytical, he rarely hesitated and pursued opportunities without the sort of relish you kind of need for a sport where someone is pointing a stick at your face.

And I laughed a bit dragging him and his friend out the door several hours later, telling them that it’s better to leave wanting more than to leave after the fun has worn off.

Peanut said, on the way home, “I think I want to fence every day.”

His friend said, long after bedtime, “I just can’t sleep. I can’t stop thinking about fencing.”

And I teared up a bit more about that. I’m not a pushy fencing mom, and if they both want to quit after the first month I’m fine with that. But it feels really good to hear them relish something I love. Because it’s nice to share something…really share something…with your child.* 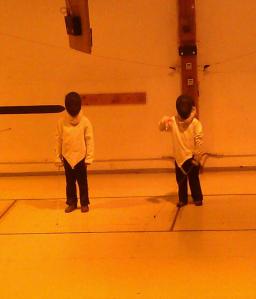 *I’m not actually sharing it with him yet, though, since he refuses to fence me during open fencing. But some day there might be a moment he’s confident enough in himself and in my  ability to modify my technique to fence a beginner that we’ll have a photo of us fencing together. Five bucks says I cry. A lot.