A dear friend asked me to accompany her to the Museum of Modern Art this week. I quickly agreed because I don’t get to see her nearly enough.

And luckily for me, she happens to have a PhD in art from Cal, so she knows her way around a museum. I mean, I do, too. You pretty much start at the door and walk through the rooms looking at stuff. But I have to read the identifying plaques and puzzle out meaning from the piece exclusive of its real historical context. She just…knows. Who, what, when, where, why, what critics said, how history has changed what critics say. I’m awfully happy to know her, and it’s a delight to see her in action in an artistic setting. Her students are wicked lucky. 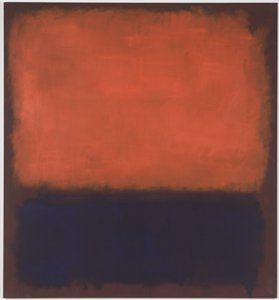 (I always wondered about Rothko, had my own opinions. Now I know more and the opinions still hold but are informed by historical, artistic, and critical context. Education is super cool.)

We went to the SFMOMA primarily to see Christian Marclay’s The Clock. 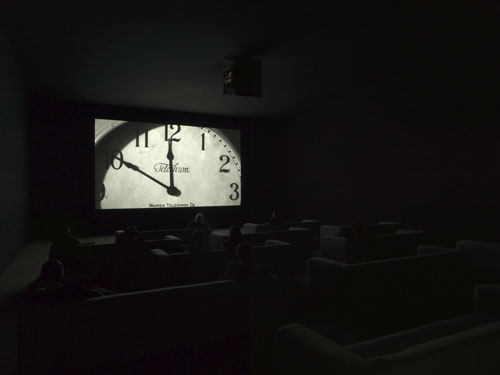 It took him three years, but Marclay put together a 24-hour film montage of clips from thousands of movies, all of which reference a specific time (often with a visual of a clock or watch). And he spliced them such that the time announced by the actors or shown on the screen is the correct time of day for the viewer. So the whole film references time, tells time, and keeps time.

It’s an exhausting film to watch because the filmmakers whose works are combined together to produce the effect of an accurate-time experience actively choreographed those clock-referencing moments to be adrenaline-provoking. So after 20 minutes of Marclay’s work, I was quite anxious. Jumping out of my chair “let’s go we have to go we only have a few minutes” kind of anxious. The only relief in those 20 minutes of watching watches was a brief interlude in which The Breakfast Club’s characters whistle the Colonel Bogey march that evokes Bridge on the River Kwai and anti-Hitler sentiment. And even that moment is tense, because we all know Principal Vernon is coming in in a few seconds. At eleven-thirty, in fact, as I’m now keenly aware.

The importance of the word “momentous” became strikingly clear: we note that something is so intensely significant that it requires we pause and pay attention to that particular moment. Then five or ten or twenty groups of people pay rapt attention to one moment. Then the next. The accumulation of the momentous moments makes real life seem slow and insignificant, and simultaneously make the moments the film marks and marks and marks into a river of exclamations. Imagine hearing and seeing, “Pay attention to this precise moment!” shouted dozens of times every minute.

We didn’t have long at the museum, but it was amazing. I learned bits about artists and contemporary art reviews that I never would have. I saw The Clock. I saw disturbing images that made me think about our role in society, art’s need to disturb the afflicted and afflict the disturbed. I made lame observations that will haunt me for a while.

So other than being a long-winded artsy equivalent of Instagraming what I had for lunch, I want to urge you to go experience some art. We often forget how important it can be to see how someone processed the thoughts they had about the time in which they lived.

See The Clock at SFMOMA if you can. The museum closes June 2 for renovations, so go soon. And early, because the line is daunting.

Or perhaps just watch The Breakfast Club again and keep your eye on the big clock on the back wall.

And think about how long a minute can really be. 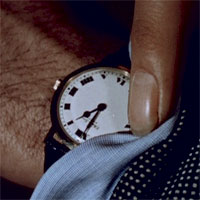